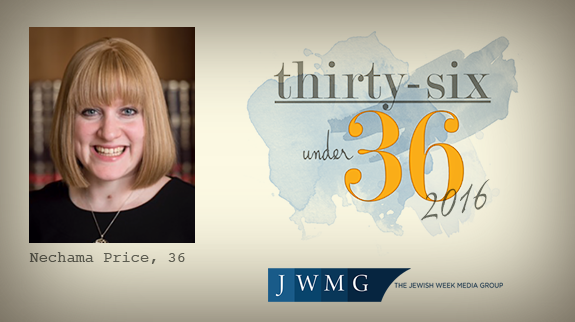 “It was something that was so important to me, that I be able to learn on a serious level, because that’s how I felt a connection,” she said. “When I got the opportunity to learn Gemara, I felt it even more.”

This love of learning drives Price to continue expanding learning opportunities for women in the Orthodox world, despite significant pushback. Amidst a whirlwind of debate about the role of female scholars and spiritual leaders in the Orthodox community, Price quietly perseveres, treading a delicate middle ground between innovation and tradition. When Yeshiva University’s graduate program in advanced Talmud study for women (GPATS) was on the chopping block as the university battled a spiraling financial crisis, Price fought for the program, and became its director in 2014.

“To me, if a woman chooses that path to connect to God through limmud Torah, whether it is Tanach or halacha or Gemara or all of them, I don’t see why they shouldn’t be able to connect to God in that way,” she says. “There’s no reason why there should be a limitation in learning for someone who’s just really trying to connect to God and to find her spiritual growth, her path.”

In addition to her role as director of GPATS, Price is one of the first five American Orthodox women to become a certified Yoetzet Halacha, an adviser to women regarding the biblical laws governing intimacy and family purity, known as ‘niddah.’ In this role, Price serves multiple communities in New Jersey, taking phone calls and helping women answer sensitive questions about Jewish law and sexuality that they may not feel comfortable asking their local male rabbi.

“In Stern College I’m hitting one age level of women, and then as a Yoetzet you’re hitting a totally different age of women, where you’re able to educate everybody on all levels,” she says.

When asked if she has a piece of Talmud that is a particular favorite, she laughs.

“Yeah, but none that I can say in this interview,” she says. “I teach niddah.”

Too cool for school: Price’s classes are so popular at Stern that she has developed a following of self-proclaimed “groupies,” some of whom have been known to create signs for her office walls.