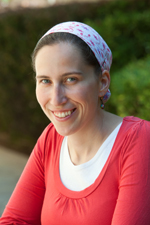 Alisa Flatow Program Alum, Elise Appelbaum-Peter, now a rebbetzin and educator in Prague, was always interested in Judaism. As a university student in Paris, where she grew up, she helped establish a Jewish student union. But Elise craved deeper knowledge.

In 2009, Elise took the plunge, immersing herself in rigorous Torah learning at Nishmat for 2 years. “Chavruta (team) study engages you in a conversation, not only with your study partner, but also with the text. It speaks to you,” said Elise.

Today, Elise and her husband, Rabbi David Peter, are guiding young people in Prague in discovering their Jewish identities and the beliefs and religious rituals of Jewish life. Many of the women Elise teaches are returning to traditions their grandparents and great-grandparents hid or cast aside.

“Several girls here asked me to set up chavruta learning after hearing about my experiences at Nishmat. Rabbanit Henkin’s teaching and interaction with students were formative for me. It’s the model for my work here in Prague,” Elise said.

“At Nishmat we learned how to learn. The teachers taught us how to search and reference information, not just for class but for all of life.

"Although I'm a leader here in Prague, I'm still a Nishmat student, calling my teachers with questions and learning in chavruta over Skype with two Nihsmat friends.”

Elise marvels how the women she teaches take Talmud study for granted. “During the Communist era, they couldn’t study anything Jewish. Today, they are unaware that until recently, women in other countries also were not exposed to such things.”