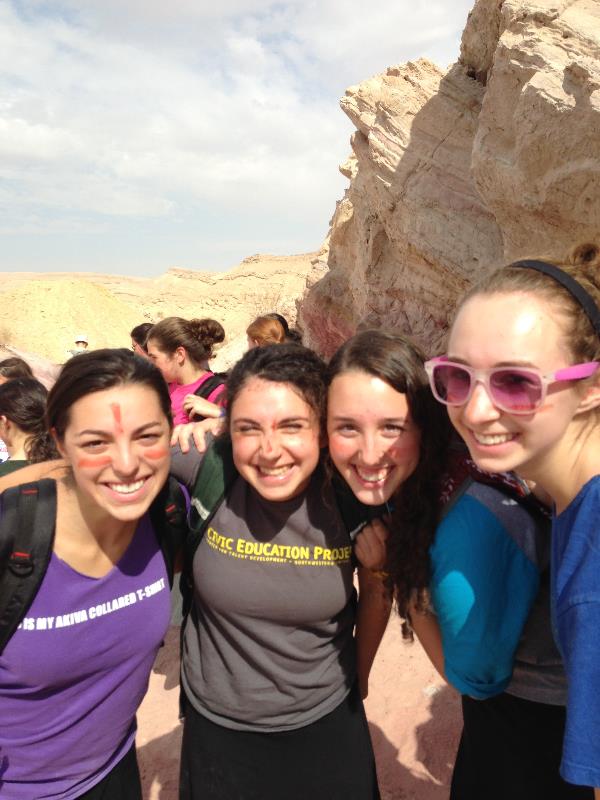 On November 8th, Shana Ba'aretz girls gathered at 6 in the morning to drive to a tiyul in a place called Colored Sands. We climbed up a mountain in the desert and had a meaningful shacharit on top overlooking a beautiful view. After a delicious breakfast, we hiked to a place with many different colors of sand, where we filled glass bottles, creating beautiful, natural designs.

That night we went to Yerucham, a developmental city with an interesting history. After Kabbalat Shabbat, we each went to a different family's house for dinner. My dinner was the highlight of my weekend. We met an impressive woman named Lea Shakdiyal, who is apparently famous all over Israel. Her son described her as a "professional feminist" and we had long discussions about women of the wall and other women's issues within Israel. She told us many funny anecdotes about meeting some of our teachers and her husband chimed in with his own stories about teaching in Albania (he is a psychology professor in Kosokova) and about the city of Yerucham and their shul.

On Shabbat, another highlight was the tour of the city. The guide pointed out schools and parks as we walked through the streets and explained the problem of education within Yerucham and some successful solutions they have implemented. For example, there was low self esteem for a long time in the city because anyone who was successful left and anyone who failed stayed. But then a Yeshiva opened and many students volunteered in the community and ended up staying on as members of the community and teachers in the school. Thus, many citizens had a higher self esteem and the schools received good dedicated teachers. The guide himself was a product of the yeshiva. He met his wife in Yerucham when she was doing her sherut le'umi and they decided to stay and dedicate their lives to building the community. It was a moving and inspirational story of the city.

After Shabbos, we played many team building games and had a lot of fun laughing together. Then we awoke early on Sunday to hike in the Ramon Crator, climbing up and down many hills, singing songs and taking pictures. It was a fun hike and we saw many beautiful views.

Overall, it was a great weekend – we learned a different part of Israel's history, had some spiritual moments in the desert and had fun relaxing and joking with each other.